Hybrids Can Bring Risk of Shock

SCOTTSDALE, Az. – As more and more car buyers switch to energy-efficient vehicles, some of the new technology may bring an added risk to emergency responders, including towing professionals. 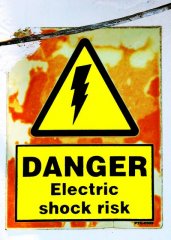 Many all-electric vehicles and gas-electric hybrids feature high voltage motors and battery packs.  The threat of serious electrical shock is an issue that police, medic, fire and towing personel will have to become educated on.

A new report from the Society of Automotive Engineers emphasizes the hazard presented by such equipment if systems are not fully disengaged following a crash.  The report recommends that manufacturers install a kill switch with a standardized location in the event of a crash.

They also suggested providing first responders with a “cheat sheet” to help quickly identify how to disable such systems.

Todd Mackintosh is chairman of the SAE committee that issued the report.  He tells CNN that the time to act is now.

“As electric vehicles enter the marketplace in greater numbers,” he said, “it’s an appropriate time to recognize best practices that facilitate a safe response.”

Last year more then 430,000 energy-efficient vehicles were sold in the U.S., according to the Electric Drive Transportation Association.  That represents more then a 50% jump in sales in just one calendar year.