State Argues That Existing Measures Are Already In Place

COLUMBUS, OH – The way in which cities and small town across Ohio regulate their local towing industry could be impacted by the State Attorney’s challenge against Cleveland’s effort to put some consumer fail-safes in place.

Th action was filed after a judge determined that Cleveland did, in fact, have the right to oversee how towing professionals conduct their business. The final decision is an important one, as it threatens to set an important precedent statewide.

The battle has made its way all the way to the Ohio Supreme Court, where this week justices heard impassioned arguments for both sides, including towing reps who are fighting against the proposed changes.

The Attorney General’s office in Ohio is also against the proposed measure, saying it would cause unnecessary chaos for tow drivers as they struggle to meet both local and state code. Asst. Attorney General Pearl Chin argued that consumer protection and clear guidelines were already in place at the state level, and that this would only bring an unneeded layer of bureaucracy to the process.

An earlier appellate decision granted Cleveland’s request to self-regulate, finding that the existing state law infringes on a municipality’s right to govern as they chose, so long as their code doesn’t flatly contradict existing state law.

“Why can’t the city of Cleveland regulate tow-truck drivers to have telephone numbers on the side of their trucks?” Chief Justice Maureen O’Connor asked.

Lawyers for the state again argued that such protective measures exist in the state’s towing code, and any deficiencies in that language should be addressed at the state level. 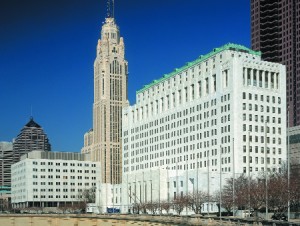 “The (state) law is comprehensive in scope,” Chin argued. “Any attempt on Cleveland’s part (to regulate towing) would just add confusion… It makes sense because tow trucks (work across multiples municipal boundaries,) “and there could be conflicting licensing regulations.”

Arguing for the other side was Gary Singletary, Assistant Director of Cleveland Law. He explained to the justices that a city should be allowed to enact regulations so long as there is no conflict. He cited the city’s en masse rule, which prohibits multiple trucks from circling an accident scene like vultures.

No such language exists in the state code, Singletary argued.

A decision is expected later this year, and could quickly spur some local legislators to step in and begin establishing new local standards.

More of the latest in legal news...