Was Wanted For Prior DUI At Time of Accident

LAKE COUNTY, IN – A Chicago-area woman is under arrest after allegedly slamming into a roadside scene, then ramping the vehicle up unto a flatbed tow truck  – all with three young children along for the ride. 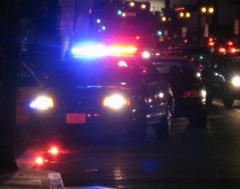 Ayesha M. Crawford was charged with felony operating a vehicle while intoxicated with under age passengers plus felony child neglect and other lesser charges.

Police had emergency responders already on site at Interstate 80 Saturday, handling a minor truck fire around 11 p.m.  That’s when police say Crawford, traveling in a SUV, barreled into the scene after her brakes locked.  The vehicle hit two police cruisers before ramping onto the flatbed, rolling off, then continuing forward a bit until police could secure it.

The arrest report indicates the vehicle was traveling a high rate of speed before braking, as a Corporal from the Indiana State Troopers was attempting to flag her down before she lost control of the vehicle.

In a press release, Sgt. Kim Riley of the Indiana State Troopers stated that the scene was vibrantly lit as Crawford approached.  Fire trucks and cruisers had their hood lights operating while they cleared the earlier truck fire.

In the vehicle with Crawford were three young children, ages 5, 6, and 1o.  One child is a cousin to Crawford, the other two are her own children.

Court records indicate that an arrest warrant was active for Crawford at the time of the accident stemming from an earlier DUI charge.

She remains in the custody of the Lake County Sheriff’s Department.

According to police, no one was seriously injured in the accident.