BEAUMONT, Tx. – A dog that was thrown clear from a massive traffic pileup in Houston Thanksgiving Day has been reunited with his owners after a tow truck driver rescued him. 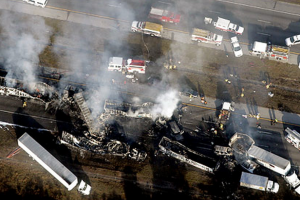 Heavy fog drifts blanketed much of Interstate 10 last Thursday morning during the height of holiday travel.

Suddenly the sound of collisions began, one atop the other.  It was just one in a series of major pileups on that stretch of highway within moments of each other. A couple was killed in the impacts, which included over 140 vehicles.

When the Ortiz’s SUV impacted with another car, the dog was thrown from the vehicle.  Mother and son suffered minor bruising, but were still practically blind in the wreckage.  They quickly got off to the side of the interstate and realized they’d become separated from Bo.

Meanwhile tow truck driver Blake Jones, who was not involved in the accident but was helping with the rescue, was approached by the dog.  Being unable to locate the owners at the scene, he took the dog home in hopes of finding them.

His girlfriend, Jesi Courville, thought it might be a good idea to post a picture on a local TV news site.  It worked, and fast.

Another area TV station had run a story on young Damien Ortiz, the brave boy who had served turkey sandwiches from his family’s Thanksgiving dinner to emergency first responders at the scene.  He had also become sepatated from his dog during the incident, the story reported.

It look less then five minutes for viewers to reach out to Jones and Courville, who were quickly able to contact the Oritz family.

On Friday, the family was finally reunited.