PEORIA, IL – The dog is named Bentley – a tan pitt bull that for the past two years has served as a watchdog of sorts for a tow shop in Peoria, Illinois .  He was stolen sometime Sunday night along with a late model Camaro and much of the shop’s security equipment 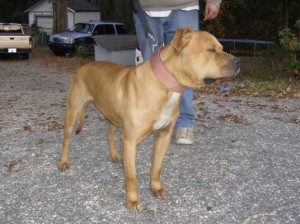 “The car was definitely targeted,” Dan Stamvaugh of Billy Joe’s Towing tells Tow Squad News.  “They were searching the office for the keys.”

He points out that other, more expensive vehicles were left untouched, along with other valuables locked in the office.  The only equipment stolen was related to the shop’s internal security, including the DVR that stores the footage.

Billy Joe’s does some contracted work for local law enforcement.  The Chevy Camaro was a 2010-model that had been brought in Saturday following an arrest by Peoria Police.

The shop’s storage lot is not visible from the street, so an impulse crime seems unlikely.  A chain was cut at an entry spot, allowing someone to walk onto the lot then drive off with dog in tow.

Police are investigating among the few people known to be aware of the vehicle’s location at the time of the crime.

The motivation for stealing the dog remains unclear.