Working Another Accident When Crash Occurred

CAPE TOWN, S. AFRICA – A tow truck driver in South Africa lept into action Saturday to rescue a driver who’d been knocked out following a crash. 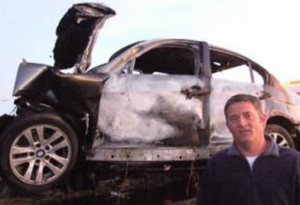 Chadley Theron was helping clear a minor freeway fender bender when he heard the impact.  This was near Kraaifontein, a suburb of Cape Town in the Western Cape province of South Africa.

The driver, Ruan Heynse, had lost consciousness when his car collided with another vehicle on Cape Town’s N1 highway.

“When I got there, the car was on fire,” Heron explained to the Daily Voice.  “I tried to open the driver’s side door, but nothing happened.  My face was hot from the heat, but I ran to the passenger door and luckily I could get it open.”

Theron attempted to pull Heynse out by the shoulders, but the driver’s foot was stuck on something.

“I kept thinking the car could explode any moment,” Theron says. “Then I immediately called the ambulance and fire department.”

With the engine on fire, Theron methodically shifted the dead weight of the driver to recover him just moments ahead of arriving fire personal.  They were able to quickly dose the flames.

Just as medics were arriving on scene, Heynse regained consciousness.

As it turns out, Theron’s work was not quite done.  He got Heynse’s address and headed off to inform his family of the situation.  Heynse, 25, suffered a broken leg and burns to his lower body.

Ruan’s mother Hanlie Heynse and her mother, 72-year old Adell, say they are very thankful to God for sending Theron to help her son.

“That wonderful man Chadley saved our boy’s life,” Adell said.  “What he did was wonderful and a great gift to our family.”

Ironically it was Chad Theron’s day to be receiving gifts.  The incident occurred on his 37th birthday.