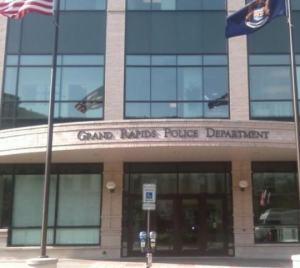 GRAND RAPIDS  l  A 31-year-old tow truck driver near Grand Rapids barely escaped with his life Wednesday night after a fast-traveling sedan struck a recovery scene, sending his wrecker toward him. Amazingly, the driver pushed his customer clear, and then leapt into the open back hatch of the vehicle he was assisting.

Gabriel Rookus suffered only a broken heel and dislocated toes as the wrecker struck the stranded motorist’s Nissan Xterra. The violent crash also injured the driver whose vehicle struck the scene. A passing driver pulled him from his car, which had caught fire upon impact.

“I shoved (the customer) toward the ditch and I jumped up because it was an Xterra,” Rookus told WOOD-News.

Rookus had only stopped at the scene moments earlier when spotting a couple at roadside with a disabled vehicle. The wife was seated in the cab of the wrecker when it was struck, but was not seriously injured. Her husband was pushed clear by Rookus.

Rookus, a two-tour Iraq veteran, was transported to Spectrum Health Butterworth Hospital in Grand Rapids, along with the driver that struck the scene, Josuua Woods.

Woods experienced a serious injury to his shoulder and hip in the accident.

According to Jay Vanderwoude, Rookus’ employer at East Beltline Towing, he had surgury to his foot Thursday which included inserting pins and screws.

“Had he not jumped out of the way, things could have been a lot worse here,” said state police Sgt. Brian Keely, speaking with M-Live News.

Rookus is actually sharing his hospital room with his wife Sawyer, who was already checked in for surgery on a broken arm.

Police are investigating the cause of the accident.