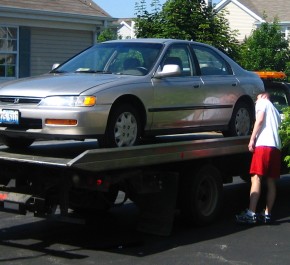 ALBUQUERQUE  l  A New Mexico towing outfit is facing a media backlash and a state decision after an owner says they held his stolen car for over five months without notifying him, then expected him to pay for the extended storage costs.

The storage fee of $2025 would exceed the actual value of the 1997 Honda Civic owned by Albuquerque resident Sumner Scwartz. He had reported the vehicle stolen in October, the same day it was removed by A-1 Auto Recovery.

Five months later, on March 11, Sumner received a certified letter indicating A-1 had the vehicle, and might force the sale to cover the outstanding invoice.

According to the shop, the vehicle had been towed for parking in a handicapped space at an apartment complex the car wasn’t authorized to park in. The shop maintains the management called for the hook-up, and that it was not a random or predatory recovery.

They blame the failure to notify the owner on the incompetence and inexperience of two separate employees.

The shop’s initial offer was to essentially cut the bill in half, dropping it to an even $1,000. After Scwartz balked at that figure, the price was again reduced to $250, along with agreeing to drop the transport charges.

By the time the shop notified Scwartz that they had the car, he’d already replaced the vehicle. He plans to sell the Honda, but does not intend to pay A-1 for the trouble.

“I have to sell it to pay off the car I bought,” he told consumer reporter Kim Holland, who filed the story Wednesday for Albuquerque’s KRQE News.

Holland dropped in on the tow shop involved for a response, with a camera crew in tow. While the manager agreed to speak off camera, Holland’s microphone was still live during the interview.

“The new guy just started sending out all kinds of liens on paperwork,” the unnamed manager said, “that may or may not be correct.”

Scwartz has filed a complaint with New Mexico’s Public Regulation Commission, specifically the Transportation Division. The agency oversees consumer issues involved in recovery work, and requires a tow company to notify an owner of transport within 5 days.

Should the agency side with Scwartz, it could mean a misdemeanor criminal charge plus a $10,000 fine to A-1 Auto.