Towing Things Back To Normal

ATLANTIC CITY, NJ – As last week’s hurricane winds and storm surges gave way to this week’s promise of dropping temperatures and snow, residents in the heart of the damage from Hurricane Sandy are still a long way from returning to normalcy.  Towing professionals near and far have stepped up in wake of the storms, in some cases driving hundreds of miles to help strangers. 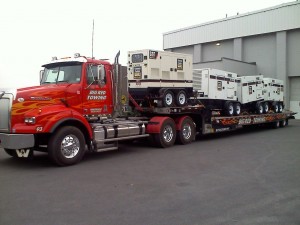 Tow efforts started in the very early hours of the aftermath.  In Bloomington, IL employees at Joe’s Towing organized five semis with large generators headed to New York.  One was headed to LaGuardia airport, others to area hospitals.

The staff drove overnight to provide electricity where it was most needed.

As they were arriving into the storm-battered region, the equipment they brought was desperately needed at new locations.  So they quickly re-routed their efforts.  At Joe’s Towing, they go where they’re needed.

She’s referring to Big Reds Towing of Syracuse, a heavy lifting outfit that regularly handles the transport of large generators.  Operations Manager Ron Pullen is still emersed in the recovery effort, helping reroute generators to new spots as power is restored at their locations.  He spoke briefly with Tow Squad before heading out to continue the good fight.

The equipment can be massive, ranging from smaller 5,000-lb units atop a flatbed, to much larger models requiring the triple axil support of a semi.

“Sometimes it’s like moving a small mountain,” one driver explained.  “And if you think it’s hard to get your sedan around fallen trees and power lines, you should try it with this stuff.”

The towing industry, like many others, jumped into action when help was needed.  Their work was at the heart of getting so many vital services back up and running.

“The newtork and brotherhood of the towing industry is second to none when it comes to assisting and aiding disasters areas,” Pullen told us.

Likewise, AAA has been in full force since last week’s desctruction, recoverying hundreds of flood-damaged vehicles that will likely never see traffic again. 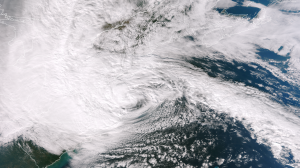 “Most of these people will not get these cars back on the road,” said Peter Crescenti, spokesman for the nation’s largest motorist organization.  “This has been a nonstop operation.  The numbers are just staggering.”

Agero, a roadside assistance company with a network of 30,000 professionals organized a supply line of fuel headed into New England.  Shops from up and down the east coast helped hustle fuel to makeshift depots before being routed north.

Efforts at restoring electricity have been complicated by this week’s cold front.  It dropped many areas back into darkness just hours after their service was restored.

Towing professionals like Ron Pullen say these situations are fluid, and triaging can quickly change priorities of need.  The new storm front wound up undoing a lot of repair and recovery work undertaken in the past week.

In the early days attention was focused largely on getting communities back into full operation while caring for the displaced.  Now those efforts continue, with the added need of keeping people warm.