MOORHEAD, Minn. –  On Wednesday the team at Ed’s Towing conducted a bit of a recovery dragnet at Minnesota State University’s Moorhead campus, in all removing 69 violation vehicles at the city’s request. 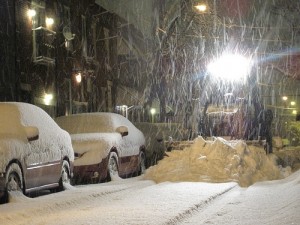 Nearly 40 other vehicles received warning notices but were not moved in the crackdown over new parking restrictions to accomodate snowplows.  The city council designated a ‘snow removal district’ last Summer that covers nearly 120 blocks. Owners must clear their vehicles from one side of those marked streets at specified times, or risk its removal.

Wednesday was the first day those restrictions went into effect, and many drivers seemed caught offguard.  For Thursday, the same rules apply to the opposite side of those same streets.

At Ed’s Towing, the operation was overseen by owner Nick Grossman, who had four full-time drivers working the location.  His crew worked in sub-zero temperatures throughout much of the sweep, which lasted well into the afternoon.

The vehicles were removed to a city-owned lot with a storage rate of $10 per-day. Owners will also have to pay a towing fee of approximately $90.