Shifts from Police to Private Contractor 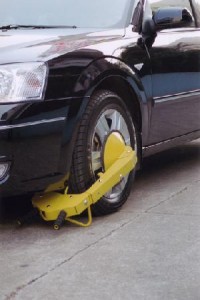 SYRACUSE, NY  l  Earlier this month, the Syracuse City Council voted unanimously to approve a 3-year contract with a private company to resurrect the revenue stream of booting automobiles for unpaid parking tickets.

Like many communities, Syracuse had been able to generate badly-needed funds for their budget gap by regularly snapping boots on at an average removal cost of $475. Starting in 2008, when the measure was first passed, the city collected over $790K in the first 12-month period.

However the revenue began drying up as police brass clamped down on man hours. Usually officers would go on boot-detail during overtime hours, which Mayor Stephanie Miner put a stop to in 2011. As a result, the payout to the city has taken a serious hit.

The solution appears to be a 3-year single-contract arrangement with Paylock, a NY-based company that provides similar services to Providence, R.I. and Wilimngton, Del.

Staff from Paylock will soon be on boot patrol 7 days-a-week in teams of two.

Drivers who qualify must have at least three unpaid tickets overdue by more than 90 days.

Paylock will receive 28% of the revenue, plus a $50 fee per car booted.

Under the old system, Paylock would provide the equipment, software as well as customer support for the program. They were paid 15% along with the $50 fine.

The company anticipates creating more than $600K for the city in its first year,

At the city council meeting, it was disclosed that currently nearly 20,000 vehicles are considered “boot-eligible’ with a combined $7.9M owed in fees and fines.  Councilor-at-Large Lance Denno suggested this is an opportunity for some drivers to be proactive.