Shop May Sue Over Pepper-Spraying

TRENTON  l  The husband of the owner of a New Jersey towing company was pepper-sprayed and arrested last Thursday, charged with resisting arrest and obstructing justice. However witnesses and a security video of the incident may tell a somewhat different story. 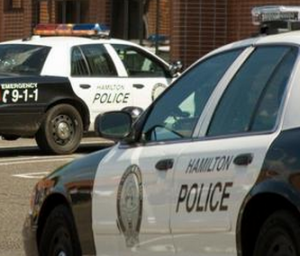 In Hamilton Township outside Trenton, a complaint was made to police against AXA/WCA Towing. A woman whose car had been towed by the shop earlier in the day had called the department after a dispute over payment methods.

Two officers arrived to investigate the matter and were allowed to enter the office. At some point during the discussion, Dennis Moon, the husband of the shop’s owner, asked the officers to leave.

This is where the versions begin to differ. According to police spokesman Capt. Remo DiPaulo, Moon was only pepper-sprayed after becoming aggressive and being warned.

“He raised his hands, pointed,” DiPaulo told The South Jersey Times, “and the officers told him if he continued he would be placed under arrest.”

At this point Officer Jose Anaya, who is off-screen in the video, discharged the spray and proceeded to place Moon under arrest. The resisting charge, according to the complaint, stemmed from Moon pulling away from officers.

Police say Moon was openly hostile toward them as soon as they arrived, but the shop’s security footage suggests there may have been no real threat of harm made against the officers.

In the video, Moon reportedly can be seen backing away from officers with his arms raised just prior to being hit with the spray.

“I didn’t rush over here, I walked over there,” Moon said.

Moon, described as a sizable man by the Times, is said to be seen “calmly ambling” across the room when first encountering the officers. This would appear to contradict reports of Moon being aggressive from the start.

“All I did was disagree with him,” Moon said in court Friday. “That’s it.”

Moon pleaded not guilty on both charges, and indicated he plans to pursue a complaint against the officers, and possibly a legal action against the department.

Moon’s wife Donna and daughter Tammy own AXA/WCA in Hamilton.

According to Moon, he received no warning before being sprayed. He alleges that during the arrest Officer Anaya said to him, “You never tell Hamilton PD to get out.”