SAN FRANCISCO  I  Drivers in the greater San Francisco Bay area can now warn vehicle owners about parking violations or even an impending tow via a text message. Using the car’s license plate number, an anonymous text can be sent directly to the owner’s phone. 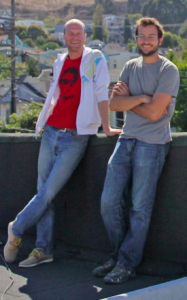 CurbTXT kicked off in 2012, and is the brainchild of three friends who wanted a way to expand communication essentially between strangers.  The idea came to them one day in 2008 when they were unable to reach the owner of a vehicle before his car was needlessly towed away.

The program does require owners interested in participating to register through their website.  The company provides a small silver dollar-shaped decal for users to attach to their vehicles.

Co-founder Alex Maxa admits that currently the program is limited to a small but growing community, but hopes to one day integrate with the city’s parking management system.

“Without the city onboard,” Maza tells Co-Exist Magainze, “it’s just a neighbor-to-neighbor service that needs critical mass to be effective.”

CurbTXT would also make it possible for strangers to warn drivers who left there lights on, or other friendly connections.  Some might use it to simply complain about an owner’s parking skill.

Likewise, such a service could easily be misused by individuals or companies.  As such, it has an easy blocking protocol against those who would abuse the system.

CurbTXT’s website describes the service as “Neighbors helping neighbors avoid the pitfalls of city parking.” According to published reports, over 300 people had joined the service as of January 2013.

In September of 2009, San Francisco Board of Supervisors President David Chiu had suggested just such a local program, one that could warn drivers before they were towed using email, text or even robocalls.  The program never materialized.

Bump.com, a similar effort was launched nationwide in 2009.   Headquartered in San Diego, their plan involved using an email address that includes the stranger’s license plate number in order to send that person a message.