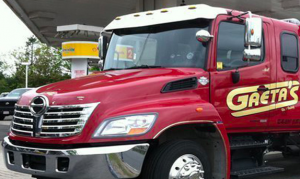 BOSTON  l  More than most professions, those who tow for a living have considerable interaction with law enforcement.

We’re on-site to recover vehicles after accidents and arrests, and a few times a year someone at a tow yard will find a body stuffed inside a truck. The industries frequently work together.

That regular communication and cooperation with police means when a tower spots something highly suspicious, they usually don’t hesitate to pick up the phone.

That was the case earlier this week in Massachusetts when police arrested two New York men after being alerted by a tow truck driver. Police later determined that an hour earlier, someone had boosted 6 sets of BMW tires from a dealership, damaging the vehicles in the process. The crime had not yet been discovered.

As it turns out, 12 new BMW tires were located inside the van in question.

Police did not specify if the two men were related.

According to police, the men managed to get their get-away vehicle stuck in the mud a few miles from the dealership. They phoned an area tow service, Gaeta’s Towing in Peabody, Mass.

Something at the scene raised the suspicions of the towing operator, who called for police assistance. Officers were later able to connect the suspects to the still-fresh dealership theft. Dispatch sent a patrol car to the nearby dealership to investigate after the discovery of the tires.

Police say considerable damage was done to the undercarriage of the BMWs when the tires were hastily removed. The thieves simply dropped the de-wheeled rides onto a rocky surface before fleeing the scene.

Johnson and Johnson were taken into custody at the scene and later charged. The van was later towed to the police station, right behind the suspects.

Towers helping police is certainly not a new thing. As Tow Squad News reported just last month, another fast-thinking operator foiled a pair of jewel thieves who called for a tow in front of the home they were burglarizing.