TX’s Solution to Toll Jumpers, Tow on the Spot

FORT WORTH – The North Texas Tollway Authority approved a controversial new policy Wednesday for drivers who repeatedly ignore road tolls – an on the spot tow. 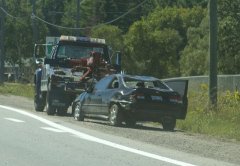 Since the state began eliminating manned toll booths over the past few years, the number of violations has steadily climbed.  The new automated system photographs the license plate of violators and forwards a bill to the owner.  According to the agency, that isn’t getting the job done.

“We’re just trying to get people to pay their tolls, very simple,” said spokesman Michael Rey, speaking with WFAA in Dallas, . “If you choose to use the tollway, pay for what you use.”

The NTTA is specifically targeting 33,000 offenders who have failed to pay over 100 tolls.  They hope it will also encourage more drivers to obey toll charges.

Many in the communities effected, which covers five Texas counties, feel the agency is overstepping the state legislature.

“Point blank, there is nothing in Texas law that allows the Tollway Authority to do what they’re proposing,” said attorney Peter Schulte.  “They don’t have the authority until the legislature says they have the authority.”

Another concern involves how willing the Texas State Troopers will be to participate, as they would be the ones pulling over the vehicles.  In the days of manned booths, the Troopers would go after vehicles immediately.  That was eliminated when the state installed the automated system and shifted the burden for collecting money owed to the NTTA.

The policy is expected to be challenged in court after it goes into effect, possibly as soon as late October.

Rey says he believes the agency is acting within the law and their jurisdiction.