One Killed, One Injured At Roadside

DAYTON – In the past two weeks Ohio highways have seen two cases of drivers plowing into roadside response crews.  This despite Ohio being an early state to recognize tow crews in the language of their ‘Move Over’ law. 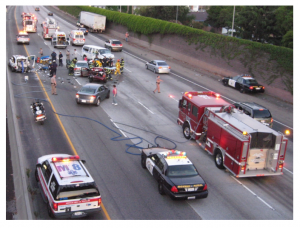 William Houck, 60, was in the process of hooking up a vehicle for transport on Interstate 71 near Columbus in the early morning hours of Saturday.  That’s when a northbound vehicle suddenly careened into the scene, killing Houck instantly.

The driver was Thomas Frederick, a 59-year-old who was questioned at the scene then released.

Houck’s niece, Terri Skipper, speaking with 10-TV News, said it would be unforgivable if drunk driving was the cause.

Another driver was struck on Sept 29, this time in broad daylight along Interstate 271 just south of Dayton.  While changing a tire on the passenger side of the vehicle, away from immediate traffic flow, the driver was struck by a semi that suddenly swerved into the work area.

The impact tossed the driver into oncoming traffic, though he was not hit again.  Both lanes of the interstate were closed to allow for air transport of the patient.  His injuries proved not to be life-threatening, and his name has not been released.

In 2009 Ohio changed the language of its ‘Move Over’ law to include towing professionals.  Under the law, drivers who do not reduce speed or change lanes when approaching a roadside response scene may be ticketed.

Despite this the problem persists, and can be especially dangerous among professional truck drivers.

“They’re going at 65 to 70 mph, and if a tire blows, or they look down for a second, our life could be gone,” says Dave Vaughn of Vaughn Towing of Columbus.  He spoke with the Chronicle-Telegram while distributing t-shirts that remind people of the ‘Move Over’ laws.

Jim Shriner, who owns and runs Broad & James Towing likened the loss of Houck to that of a brother.