CATHEDRAL CITY, CA – Last week’s heavy rain led to flash flooding throughout southern California, including the small community of Cathedral City.  When rising waters left a number of drivers trapped atop their vehicles, a local family-run shop jumped into action.

Mojica Towing’s dispatch desk got word that drivers were stuck in flood waters on nearby Highway 111.  They immediately sent four trucks over to see if they could help. 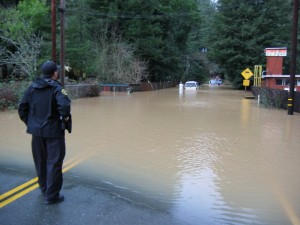 The drivers quickly found the troubled motorists, standing atop their roofs in the center of the highway.  After receiving the okay from local fire officials, they began picking up the drivers and shuttling them to safety.

Some vehicles were actively moving with the water as the tow trucks paced their movement to retrieve the passengers.

“It looked like that water wasn’t stopping,” said Marcos Mojica, who, along with his cousin, father, brother and uncle led to effort to bring everyone to high ground.

“We told (the fire department) we’ve been in this situation before,” he continued, “So we told them it’s probably a good idea that we take a look at these people and get them out of their cars before they have a major problem and have more water come through.”

“A couple of them were AAA customers, and wanted to use their memberships to pay for the service,” he said, but Mohican refused to take payment.

“It was one of the best days in my life,” one driver aded.  “Now I think maybe I saved a life.”