ST. PAUL, Minn. – Many parts of the country are experiencing an unseasonably late start to wintery weather this year.  Several areas have just recently seen their first severe ice this season, bringing a noticeable uptick in dispatch calls. 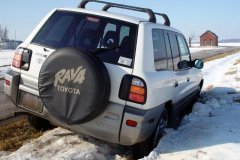 While the greater Twin City region has seen some accumulation this year, the warmer weather overall has lead to below average business for tow shops. That all began to change late last week.

“I think people forget how to drive in the wintertime,” said Nicole Smiley, whose vehicle was totaled this weekend near St. Paul, Minnesota. Speaking with KAAL-News, she describes an out-of-control car that slid into her on the fresh ice.

“All of the sudden, a car just came around the median and just came at us head on,” she continues.

In the Twin City region, signifcant ice and snowfall has seen the expected increase in both accidents and disabled vehicles, according to a shop owner in McCloud County.

“It’s a little slick,” he says.  “Just needs a little salt.  But this is only round one – round two is going to be a lot worse.”

Mathison is referring to an approaching storm front expected to add more accumulation.

For Smiley, the difficulty of replacing her vehicle begins, though she is trying to keep things in perspective.

“We were just happy that we were safe and sound,” she says.  “You can replace this but you can’t replace people.”