‘Highway Thru Hell’ on Discovery Channel

NEW YORK, NY – The spotlight of reality television will turn on the towing profession this week with the premiere of the new Discovery Channel Canada series ‘Highway Thru Hell.”  The premise surrounds particularly dangerous stretches similar to those featured on ‘Ice Road Truckers’.

The early episodes will deal with the notorious Coquihalla Highway in British Columbia, Canada.  A heavy rescue team specializing in clearing semis from the inhospitable but key trucking route will anchor the series. 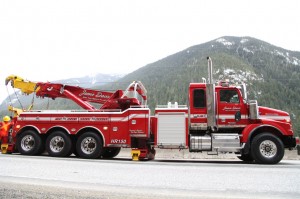 The team is from Jamie Davis Heavy Rescue, which works the 60-mile stretch which winds through the Cascade Mountain Range – widely considered one of the most lethal roadways in North America.

The pilot follows a particularly busy workday involving a nighttime multi-semi pile-up, big rigs spun out off the road and a rig lodged into an icy pull off ramp.

Jamie Davis’ 16-year old stepson Brandon is among the featured players as he learns the family business.  In the debut episode the harsh nature of the industry reveals itself as the boy discovers a fatality among the pile-up wreckage.

The promotional material for the show gives much attention to the shop’s giant vehicles, which producers call the “undisputed co-stars” of the series.  This includes a fixed 30-ton crane known as Rescue 52, and two speciality winches designed for greater reach.

“It would take eight standard tow trucks to match the capacity of this single heavy wreck mover” according to show’s press material.  The equipment is used in an early episode on a jack-knifed semi dangling off a cliff.

The first season consists of eight one-hour episodes beginning September 4th and is set to continue on Tuesday nights at 10 p.m.