Vehicle Had Been Seized For Unpaid Taxes 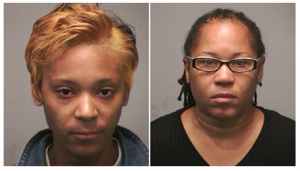 Robyn Handy and her daughter Rojonna arrived at Crown’s Towing after their vehicle had been seized Monday night for unpaid taxes.  This is where they encountered a very pregnant employee who police did not identify by name.

The daughter insisted they had paid their taxes to a Crown tow truck driver, who gave them a business card as a receipt.  They did not have the receipt with them, explaining the driver had taken it back.

The clerk explained that payments could only be received through the city tax office or at the firm’s office.

This is when, according to police, 24-year-old Rojanna Handy got into her mother’s vehicle and began driving toward the clerk, who stood her ground and closed the lot’s gate.

Police say the two women then began punching the employee while pulling her hair.  The clerk’s account of the events is supported by the shop’s security footage.

The mother and daughter were arrested at the scene and charged with trespassing along with third-degree assault of a pregnant woman and first-degree trespassing.