MASSILLON – An Ohio garage that opened in 1938 closed up their doors last week, simultaneously ending one of the area’s oldest service stations and towing outfits. 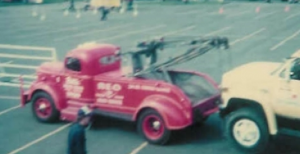 Rohr’s Towing was started by Lee Rohr, who passed on the family business to his son Bob over 40 years ago.  In recent weeks Bob’s been breaking the bad news to his many regular customers.

“My dad started it right here in the same location,” Rohr said, speaking with The Independent. “I always worked for him. I started coming down here when I was in grade school.”

Rohr explains that his decision was not easy, but was ultimately the right one. Many long-standing customers in Massillon will be very sorry to see him go.

For over two decades, Dave Scheetz has intrusted his family’s cars to the Rohr garage.

“You name it, we’ve done it,” Scheetz said. “With Bob and his guys, if I even thought something was wrong I could bring it in to have them look at it and he wouldn’t charge you. It’s one of those landmarks in town.”

In the seven decades since the doors opened, the shop has survived a massive fire and heavy layoffs during economic hardships.  Through it all, Bob Rohr has emerged ready to enter retirement.