SPOKANE – Last week a superior court judge ruled in favor of a Washington towing firm that had been widely maligned following Hoopfest ’10.  At the direct request of property owners they removed around 40 vehicles during the basketball event, only to be investigated by police and threatened with a five-year suspension of their operating license. 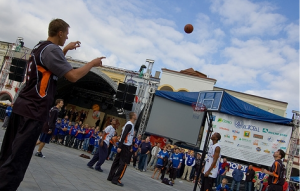 “People call us up and say, ‘You’re crooks, just like the newspaper said,” owner Kent Meyers explained to Spokemans Review writer Shawn Vestal.  Vestal was one of the many voices calling for justice in the case, and he recently conceded in his column that a lot of that anger was misdirected squarely at the Meyers.

With his wife Debbie, Kent runs Evergreen Towing of Spokane.  Before the events of June 26, 2010 they had plans to expand to a second location.

Now two years on they have cut their staff nearly in half.

“We’re a small family business,” Kent told Vestal. “This thing has really hurt us, when we know we didn’t do anything wrong.”

One of the owners whose illegally-parked vehicle was removed was a police officer, and this may have played some role in law enforcement getting involved.  An official investigation was launched, with whispers of premeditated predatory towing involved.  Local news media jumped at the story, with public opinion soon turning against Evergreen.

Ultimately the matter was left to the Department of Licensing, which ruled the firm had violated the law and sought a five-year suspension and a $40,000 fine.  It would have meant the end for the Meyers’ business.

Instead they fought back in court, showing that the legal owners of the property had, through representatives, properly and legally requested the removal of the vehicles.  A superior court judge agreed that the towing was done at the behest of property owners Harlan Douglass and Keith Scribner.

In his column, Vestal describes the propety owners’ actions as “a petty, mean-spirited act.”  He added, “If people parking in their empty lots were such a burden, they could have taken steps to keep them out. But that does not speak to Evergreen’s actions; they did what they do, and they did it legally.”

The Meyers had planned to retire in the next few years, but that has been delayed.  They purchased Evergreen in 2000 and had been slowly expanding the business ever since.  They lost contracted law enforcement work as a result of the matter, and reportedly spent tens of thousands of dollars in legal fees.

Vestal, whose initial headline from the matter was ‘Impound Company Reaped When It Towed’ began clarifying the issue for readers in March with a column titled ‘Villiany No Longer Certain in Towfest ’10.’

Last week he visited the Meyers, who he admits paid a heavy price in the outcome.

“I visited some supposed villains this week,” he wrote. “What I found instead was a family.”