FT. LAUDERDALE – A dangerous interstate configuration in Fort Lauderdale claimed another life last week after a bakery truck struck a barrier and was left dangling from an overpass onramp.  A passenger in the cab was killed and the driver was injured. 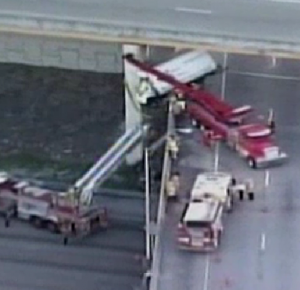 Two heavy rescue tow trucks were called in to retrieve the teetering vehicle from the edge.    One would angle to lift the truck upward while another would pull it back to solid ground.

The driver, Buenaventura Fernandez, Jr. of the Tracy Bakery, had sustained a leg injury in the impact.

Firefighters were able to reach the driver using a ladder truck positioned beneath the dangling vehicle once the heavy duty truck had secured it.

This particular overpass configuration, a confusing tri-level interchange connecting to State Road 84, has led to multiple accidents and fatalities in recent years.

In 2008, three people were killed after a Jaguar struck and flipped over the barrier wall, dropping 50-ft. to the interstate. Last year a passenger on the mirroring southbound ramp was nearly killed in a similar accident.  It opened in 1990.

Warning signs tell drivers to lower speeds for the duration of the ramp, as high speed is typically found to be a contributing factor in the accidents.

The privately-contracted crew had removed the truck within three hours of the crash. Traffic was re-opened about an hour later.