BIRMINGHAM, Al. – On a Saturday afternoon in late November, tow truck driver Tim Kimble was working a basic insurance call in southwestern Birmingham with his wife Jackie.  It was not a repossession, or even an involuntary tow, just a simple transport. By nightfall, however, both Tim Kimble and the vehicle’s owner would be dead. 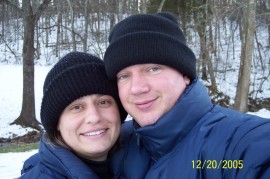 Jackie Kimble tells Tow Squad News that she fired the shots that killed 21-year-old Roderious Smith, the car’s owner.  This after he pulled a gun on her husband.

An argument escalated between the two men over a pothole her husband had driven over with Smith’s car attached.  Jackie explains that Smith began yelling and threatening her husband, despite no damage being done to his car.

“I tried to save my husband by getting my husband’s gun out of our tow truck,” Jackie said.  “I told the man to put the gun down or I would shoot. “

That’s when Jackie says Smith pointed his gun in her direction, and she fired off a shot.

Jackie says as she ran around the truck to reach her husband, two shots rang out.

“I got to the other side and (Smith) was still standing, holding his gun,” Jackie said.  “So I began firing until I ran out of bullets.”

Tim Kimble was face down on the road, motionless.  Jackie managed to get him turned over and took his hand.  She could see he’d been hit, and scrambled to call for help.  He squezzed her hand, and then stopped breathing.  Kimble died at the scene, as would Smith later that day.

Jackie had first met Tim Kimble in Lakeland, Florida in early 2000.  At the time, one of Jackie’s friends worked for Tim at his security company.  The friend convinced her to help work an upcoming concert that Tim needed extra staff for.

“We met the day of the concert and spent every day together ever since,” Jackie recalls.

The couple got into towing after Tim ran a few calls for Jackie’s brother at his tow company in Florida.

She describes him as a natural for the business, great at fixing things and solving problems.

“Tim was a man of many talents,” she said.  “I called him my MacGuyver, James Bond, and Einstein – all wrapped up in one perfect man.”

Jackie is now struggling to rebuild her life after Tim.  The investigation into the shootings is still open, though it seems unlikely Jackie would be charged.

She’s reached out to the towing community for support and understanding, and has established a website to honor her late husband.  The address is  www.inlovingmemoryoftimkimble.com.

The Birmingham incident spotlights how even an owner-requested transport can suddenly turn into a life-and-death matter.  It is a bizarre and baffling notion seen all too often in recovery work, that sometimes people place more value in a vehicle then a human life.