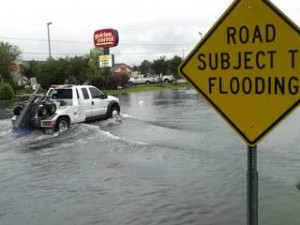 Two counties in Michigan, Midland and Newaygo, each declared a local state of emergency Thursday following two days of record-setting rainfall. The nearby Grand River is expected to level nearly a foot over the 28-year-old record.

By early Thursday, numerous areas were seeing flooded creeks as another two inches fell. Before the sun would set, city streets and rural routes would become dotted by abandoned or stalled vehicles as the waters continued to rise. The wait-time for a dispatch kept adding up as well.

“I’m getting a few calls for pull-outs but quite a bit are in places you can’t even get to,” said Doug Pinckney, a manager at Bud’s Wrecker Service. He told M-Live News that at one point he was requested to pull 30 cars from a single lot.

All 21 trucks from Merl’s Towing in Wyoming, Michigan were out on calls Thursday, as were most of the five from Berry & Gillikin’s Towing in nearby Grand Rapids.

One service reported a minimum 2-hour wait for a truck to arrive on-site, if not longer.

The downfall has greatly effected a number of public services in the area, including trash collection. By Thursday the Mid Michigan Waste Authority announced it was suspending most garbage trucks for the remainder of the week. Area hospitals have already instituted their flood preparedness plans, including MidMichigan Medical Center.

As individual counties are responding, state leaders are also watching the situation as rainfall is expected to continue through to Sunday. This includes Michigan Governor Rick Synder.

“The governor and our team are just getting regular updates,” said spokeswoman Sara Wurfel. “Teams are monitoring it closely and will be staffing up over the weekend.”