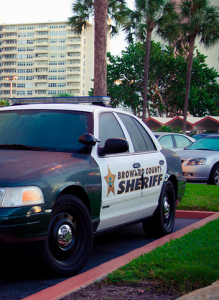 FT. LAUDERDALE  l   A dispatch from an apartment complex to remove three violation vehicles lead to a tow truck driver being shot and killed Tuesday afternoon near Ft. Lauderdale. The attack and the suspect’s subsequent gunfight with police was captured on a dash-mounted camera in the tow truck.

David Herr of Hollywood, Flor. worked for All County Towing in Ft. Lauderdale. Around 3 p.m. Tuesday he was hooking up a 2001 gold Jaguar at the direct request of the apartment’s management. Two other drivers from All County were also on site handling different vehicles.

The vehicle David Herr was towing is owned by a 31-year-old Florida man named Triston Johnson, who according to the police report, arrived to discover his vehicle about to be removed from the premises.

An argument ensued, at which point police say Johnson pulled a gun and fired on Herr as the tow driver was walking away, striking him in the back of the head. He then reportedly fired additional shots at the fallen man as he lay bleeding.

Calls immediately went out from witnesses to 911 dispatch, and arriving officer Deputy Mike Ryan of the Broward County Sheriff’s Department was also fired upon.

In his report, Deputy Ryan said he first discovered Johnson searching the immediate area for something when he arrived. Upon spotting police, Johnson fired several shots from a semi-automatic pistol.

The suspect was shot at least twice after additional police arrived and was taken to an area hospital. He was quickly charged with premeditated murder and attempted murder for firing at Deputy Ryan.

When word broke in the local towing community about the shooting, driver Kevin Godfrey immediately headed to the scene. A longtime friend of Herr’s, he spoke with The Sun Sentinel.

“Somebody didn’t want to have their car towed,” Godfrey said. “Now [Johnson]’s going to go to prison for the rest of his life and Dave is dead over a car. A car!”

The video that was recorded by the dash cam in Herr’s truck will not be released to the public, but will likely be used as evidence in the upcoming trial.