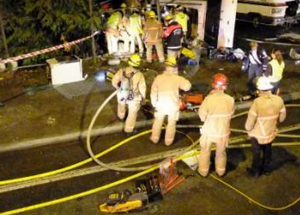 SYRACUSE  l  A bizarre and tragic trailer fire that claimed the lives of 30 horses along a NY interstate last week wound up leading to a very unusual dispatch for one area towing firm. They were tasked with collecting the remains of the animals and transporting them from the scene.

After doing so, however, the shop says they were left without answers about what to do with all the carcasses. It quickly became a grim and worsening situation as they waited for days on instructions or the arrival of a moving a truck to haul them off.

John Chordas and his brother Chris Chordas own and operate John’s Body Shop in Binghamton, just south of Syracuse. Late last week they told the Associated Press that after working seven hours to clear the scene, they were never given details or arrangements about final disposal or collection.

On Monday morning, an employee at John’s Body Shop politely declined to comment to Tow Squad News, citing a “gag order.” Unclear was whether the carcasses had been collected or possibly already destroyed.

The horses were killed last Monday night while being transported to Canada from Pennsylvania after a fire started somewhere in the truck hauling the trailer. Driver Clarence Phelps told police he quickly pulled to shoulder after noticing the flames on the truck’s passenger side.

Phelps was unable to extinguish the blaze, which began consuming the sizable trailer before any of the animals could be freed.  All 30 would perish.

As of Friday, no one had been cited in the incident, with law enforcement indicating that the transport was lawfully conducted.