HADLEY, Penn. – For many tow shops, when a call comes in for motorcycle transport, it often involves tying down the bike with varying degrees of stability.  It’s not always an exacting science, frequently complicated by customized bikes more difficult to secure. 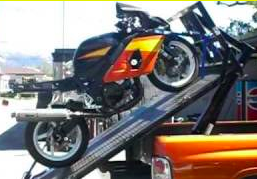 At AmeriDeck in Pennsylvania, they specialize in making those connections stable. With a wide line of decks specifically designed for a variety of vehicles, they provide a much-needed solution for tow shops, dealerships and auto enthusiasts.

Their Motorcycle Deck features a hydraulic-powered lift arm that secures to a truck bed. With the push of a button it brings the entire platform into position.  The deck is detachable, and interchangeable with their other systems.  Available at lengths of 8′ and 6.5′, they feature removable landing wheels and 8 separate tie down points.

For garages and tow shops that specialize in motorcycle service, the hydraulic decks can mean greater efficiency and a safer workplace.    The AmeriiDeck line is made with high-grade commercial steel, and features a load capacity of 2,500-lbs.

Originally a Canadian firm, AmeriDeck was purchased in 2009 by Dale and Barbara Diest.  The couple moved the base of operations to Hadley, Pennsylvania and began expanding the line.  Their custom equipment has been designed to work with a broad range of vehicles and equipment, from snowmobiles and jet-skis to ATV’s and basic landscaping gear.

The decks are produced at their newest facility in Hadley, a 5.2 acre campus utilizing 26,000 feet of production space. 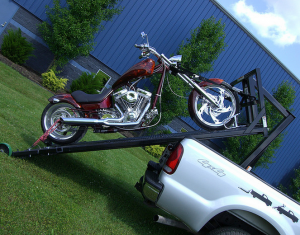 One Response to AmeriDeck’ Lifts With Ease